Once getting past the treatment phase of cocaine addiction, the final step in the recovery process is finding a way to address the number of symptoms that have to be dealt with as a result of the drug being absent from the patient’s body. This phase usually lasts one to two weeks, though it depends on many factors and may be longer. There is a second phase where the problems are primarily psychological in nature. Stages of withdrawal can make it difficult to quit, but once you have identified them, a method for treatment can be developed.

There are both physical and psychological symptoms as a result of withdrawal, and each needs to be identified and understood to be properly dealt with. These events can be very distressing for the patient, so it is important not to ignore any of them.Among the physical symptoms, there are chills, body aches, pain in varying degrees, shakiness, and physical exhaustion. Depending on the severity of any one of these symptoms, the patient may have difficulty functioning normally in their home environment.

Psychological symptoms include depression, which is one of the most often seen symptoms in recovering patients, anxiety, an inability to feel pressure (due to the lack of a stimulant), and difficulty in focusing. The inability to feel pleasure is usually accompanied by an intense desire for more cocaine. Though this seems like “common sense” there are more than a few people who believe that the result of treatment for cocaine addiction results in an absence of desire for the drug.

Dealing With The Symptoms

Physiological symptoms can be relieved by a controlled medication regimen prescribed by a doctor who is aware and involved with the patient’s addiction problem. However, there are some symptoms that the patient will have to endure for the period of recovery as their body adjusts to no longer having the drug available to it.

Psychologically, the symptoms are much more difficult to cope with. The reason for this is because it takes time for the patient’s body chemistry to return to its normal state. Complete recovery from psychological symptoms can be as long as two years. This time frame immediately requires that the patient be patient, no pun intended. The good news is that because there is a wealth of research on cocaine recovery, the patient will know what to expect and can prepare for it. While this is not the solution to actually solving the problem, they can get the help and support needed to get them through the toughest times.

How Long do Cocaine Withdrawals Last 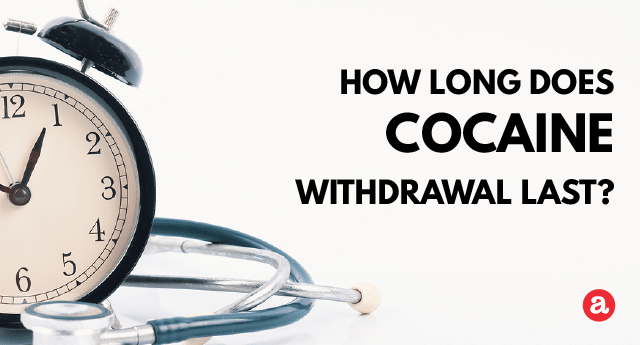 Withdrawals are usually the most difficult part of any drug habit. They can range from mental to actual physical symptoms. Depending on how long and how much was used, mental symptoms can last from a day to a few months. While physical symptoms for a short term or occasional user can only last a few hours to a couple of days. Chronic, long term use can cause life long cravings.

If you have only used cocaine once or rarely use, the time it takes to get over withdrawals is usually short. Most will only suffer from strong cravings to do more. If you suffer from intense cravings, understand that this is one of the warning signs of a developing addiction.  It’s important to stay away from the drug or friends that may encourage coke use. Giving into these cravings can be a sign that you may need help.Binge users and long term users of cocaine may suffer from physical and psychological withdrawals. This will complicate the cocaine detox process. By making it physically challenging to stay off of cocaine.

A coke binge can produce intense but short term withdraws, usually not lasting more than one week. Avoiding any more drug use or staying away from other users will reduce the chances of relapse.

Long term user will find it difficult to quit cold turkey and may require professional help to prevent relapse. Physical withdraw symptoms can last for days, even weeks in some cases. Although these symptoms may seem intense, the real challenge for recovering cocaine addiction is the mental addiction. The cravings and mental addiction can last a few months, or until habits are broken.

Using Sure Jell for a Drug Test