Though there are a number of suggested models for defining the stages of withdrawal for cocaine addiction, the Department of Health of Australia cites a study that is consistent with most of the other generally described stages and is often referred to as the starting point for further research. 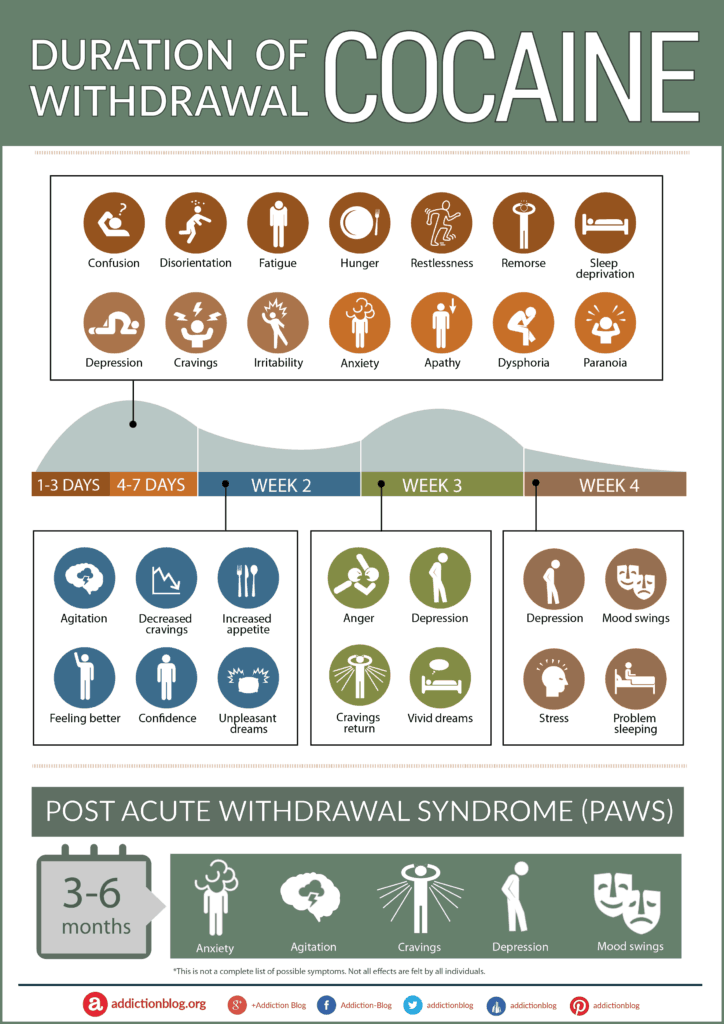 This study was based on research conducted in the United States. The US was chosen due to its high percentage of population that uses Cocaine. They have broken the stages of cocaine withdrawal into the following 3 stages or phases:

Because Cocaine is such a fast acting drug with a very short half life. Theses stages usually come quickly, as fast as 90 minutes after the last use. This doesn’t mean that someone who has a history of heavy long term use can kick their habit within a few hours. Long term heavy drug users will develop physical addictions which will usually need to be treated by a professional.

The crash or “come-down” from coke is usually felt within the first 30 minutes of last use. This is because coke spikes Dopamine above normal levels. Once the drug has worked its way through your body or has metabolised, Dopamine drops causing the “crash”. Symptom’s of Coming Down from a Cocaine high vary from person to person, amount used and duration of  use.

An occasional user or some one that has only used a small amount of coke may feel a drop in energy, depression, weakness and or a sudden sadness / dysmorphia.

Heavy or a coke binge will intensify those symptom’s with the possibility of: Flu like symptom’s, runny noise, muscle aches, headaches, etc..

When a person first enters a program to begin treatment for cocaine addiction, the removal of the drug from the patient’s body will have both physiological and psychological effects manifested by feelings or irritability and anxiety, exhaustion with the expected increased need to sleep, an increased appetite, and a general dissatisfaction with the state and course of their life.

During The Crash there may have been a reduction in the desire to use cocaine. The Withdrawal phase is the point where the desire to use cocaine increases. What follows after continued withholding of the drug are feelings of irritability, continued fatigue, and poor concentration. This phase can last as long as 10 weeks before progressing to the third phase. Again the duration of withdrawals is directly related to amount and length of use.

Cocaine is physically addictive and withdrawals can be complicated by physical dependency. This can cause one to actually feel pain. Although not as common and usually a condition only long term users go through. This phase is usually the most difficult to over come. The cravings for coke can get unbearable for some, leading to more use. Its important to stay focuses and understand that this will pass in time.

This phase is characterized by the patient having a craving for the drug if external cues are present to mentally or emotionally stimulate the desire for the drug. Habits are usually accompanied by other aspects of life. For example:

A smoker may make it a routine to start his or her day with a cigarette and a cup of coffee. Once they decide to quit smoking cigarettes, the morning coffee can cause a conflict issues. It becomes a reminder or cue that one should also light up a cigarette. This same principle can effect one that quits cocaine.

Minor “cues” or the daily rituals we create by habit can trigger intense cravings. The best way to coup is to identify the cues and replace them with new daily “rituals”. A slight adjustment or break from that routine can make a big difference and help kick most habits.

No discussion about cocaine addiction withdrawal would be complete without mentioning PAWS – Post-Acute Withdrawal Syndrome. This occurs in some patients after completing their recovery program, and describes the return of some minor withdrawal symptoms, which may last for several years.

Depending on the specific symptoms that are present in the individual patient, a combination of carefully prescribed medication to reduce some of the physiological and psychological effects is one common course of action. In general, much of the work to be done will be done by the patient, requiring them to recognize that there will be some discomfort during the treatment process. Patience is an essential tool to complete the therapy and begin the return to a normal life. Coping as it relates to PAWS is recognizing that the recurring symptoms are significantly milder and of a shorter duration than during the initial withdrawal process.

How to Detox From Cocaine